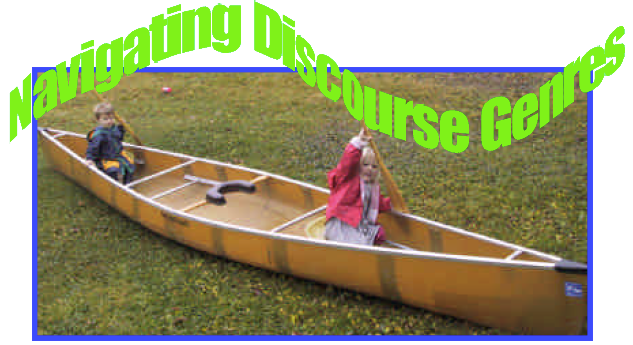 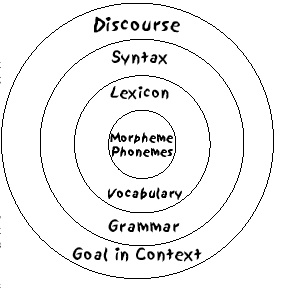 The diagram to the left provides an illustration for understanding how discourse fits into a linguistic picture. This metaphor starts with the smallest units at the center and moves out to larger parts of language. Morphemes and phonemes are the parts that combine to make a word or sign. In ASL, they are generally described as the parameters: handshape, location, movement, palm orientation, and non-manual markers. The next level of language is the lexicon or individual vocabulary items. Above that is grammar and syntax. What holds all of these things together, encompassing them all, is discourse. Things at all of those levels can provide significant clues for interpreting–and it is a study of discourse that helps us to make these connections.

understanding of discourse is applied. In Minnesota, there are two different ways that “P” is articulated. If a signer uses the “Minnesota P” as shown in the picture below, it is a sign that the person either was a student at the Minnesota School for the Deaf in Faribault, or was taught by people who were students there, and thus has a strong connection to the residential school experience. It also gives a hint that the person may be interested in preserving the “old signs” of ASL. All this information from a change in parameters shows how discourse can help us to make connections.

This project, however, is focused specifically on discourse genres, and I think it is worth giving some specific examples from the text of how to do the work of discourse analysis and how it can make a difference to interpreters.

The first two texts are both narratives, that is recountings of events told more or less chronologically. One interesting thing to compare between the two is the use of dialogue or direct speech. During Jenny’s ASL narrative, there is a lengthy section at the height of the conflict when she describes the interaction between herself and her son– using what would be perceived as direction quotations. This functions to show the emotional impact of the situation both on her and her son–and gives us a reason as viewers to care about the story. In contrast, Eric’s English narrative uses very little direct speech, but relies more on narration. At the height of the conflict when Eric and his wife, Amy, are making their way across a rough portage, he does not use any characterization of Amy’s emotions. Instead, he uses narration and description: “And, as we neared the end, the tears started to flow a little bit.” In many respects, this narration requires the listener to infer what Amy’s emotional response is to the situation. While some of the dis-course differences here may also be attributable to gender, it is important for interpreters to note that English and ASL uses direct speech differently. Often, if English interpretations keep the form of ASL dialogue–that is the “he said, she said” form–it can turn a more formal narrative into one that sounds like it is being delivered by a teenager. “Like then he said, “‘Oh, yeah?’ and then like I said, “‘Yeah!’”    instead of “Then he challenged me and I stood up for myself.” Both may convey the same meaning, but will be received differently by an English speaking audience.

Another example of how understanding discourse can help is noticing asides and digressions within the flow of a narrative. During Jenny’s narrative, she frequently goes off the point of her main narrative to provide background information. One example of this is after arriving at their departure lake, she explains about the route having many short portages, what a portage actually is, and why it isn’t possible with two young children. She then returns to her description of the actual events. Some of these digressions are marked by lexical items: signs like “HALT” (5 hand – shape briefly waved in front of torso) and then ANYWAY marks a return to the narrative. Other digressions are marked by subtle body shifts–either backwards or to the side. If interpreters do not pick up on these clues, it will be an easy mistake to assume that the narrative is flowing more chronologically than it really is–and thus will not catch when the actual canoe trip begins and will take much of the background to be a part of the events. This can lead to an interpretation that strays significantly from the original message.