This is a presentation by Dr. Ben Bahan at StreetLeverage in Fremont, California in 2016.    The video of the presentation is presented as well as an English translation.  Though it takes more time to watch the ASL, I would recommend it is worth it to see such an excellent example of Academic ASL.

Dr. Bahan refers to the work of James Gee who is a social linguist and literary theorist who focuses on “Discourse” – differentiating between the primary Discourse a person learns in their family of origin and the “secondary Discourse” they learn in other settings.  (Which connects to the idea of BICS/CALP described below.  Read more about Gee’s work in his article “What is Literacy?”

Importance of Early Exposure to ASL

This article shares research about the impact of the age of acquisition of ASL for students.   Importantly, it points out that early exposure to ASL is a benefit for both signing skills, but also cognitive development – which supports the acqusition of speech skills as well.

Learning English as a Second Language 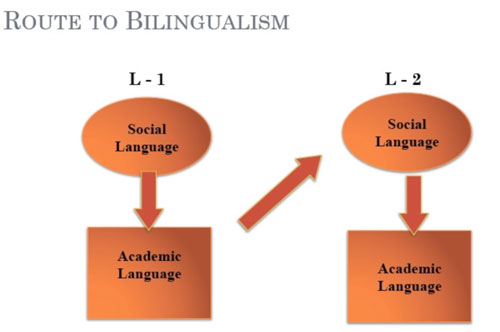 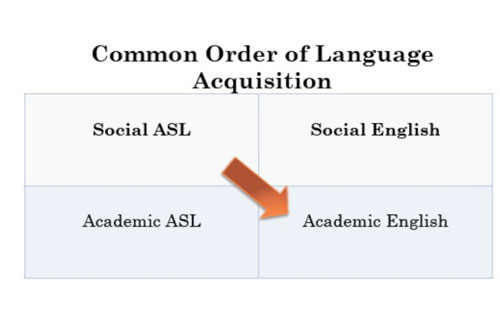 The bottom graphic demonstrates what is often attempted for Deaf and Hard of Hearing students – which in part explains such poor results.

A Video presentation of Dr. Raychelle Harris on Academic Discourse in English and ASL (Provided in ASL with English captioning)

The kick off lecture for the ASL in Academics Lecture Series

Use of Academic ASL in a High School Math Class

Answers to Math Questions from Veditz

John Brooks, a Deaf math teacher from San Diego, explains how to do a number of different problems and processes in ASL.