That is goal of interpretation. When we speak, we are trying to accomplish some goal. It might be to teach, to amuse, to persuade.  So, when our words are shared through an interpreter to someone who speaks a different language, it means that the goal isn’t to try to share a literal translation, but to accomplish the same goal of the speaker. 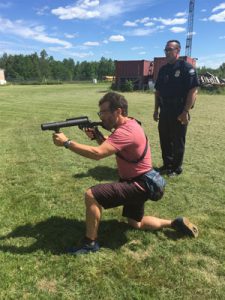 I thought of this last week as I was at a training with Lt. Bob Shene, the use of force coordinator for the Duluth Police Department.  In addition to my work as a sign language interpreter and educator, I also serve on the Duluth Citizen Review Board. As part of this service, Renee Van Nett and I were getting trained on the Duluth Police Department’s new “less-lethal” launchers that are designed to fill a gap in police options between Tasers and guns.  (See Duluth News Tribune article on the new weapons system here.)

Although the launchers look somewhat like rifles, they fire a 40 mm  round that is tipped with blue sponge, and can be used to incapacitate someone.  Being hit with one of these projectiles is approximately the same as being struck by a baseball bat – and can cause a really bad bruise – enough to get people who are threatening themselves or others to comply without the need for a long stand-off.  This system has a significantly lower chance of ending up with someone killed. 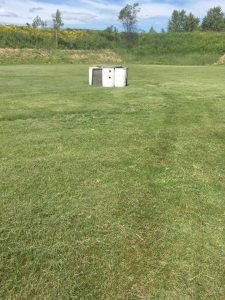 These launchers are also extremely accurate.  In my training, I hit a small circle of paint on a barrel right in the middle from 40 feet on my first shot.  (And believe me, I am no marksman.)  So, it allows officers to be more precise about where they strike someone.  In our training, we learned that there are three zones:  the legs (avoiding the groin); the lower abdomen, and the chest (avoiding the head).  Officers are trained to first go for the legs because it is less chance of significant injury for person while still getting the person to comply.

The reason I thought about the term “dynamic equivalence” related to the training was because officers are trying to figure out what language to use when talking with someone in one of these situations.  Officers are trained to warn the individual to give them a chance to comply before the launcher is used.   They are trying to figure out what words can lead to the dynamic with the best result for everyone involved.   Lt. Shene was clear that the verb they want to use is “hit,” not “shoot,” because “shoot” brings to mind a gun with bullets.  Yet that is difficult to change, as “shoot” slipped from his lips three times in our training.    The phrase he tried out on us was, “I’m going to hit you with a less-than-lethal munition.”  Another option:  “I’m going to hit you with a kinetic energy projectile.”

My role on the Citizen Review Board is often to help the community and the police better understand each other, much as my role as an interpreter between people who use English and those who use ASL.  Our mission is “to promote positive relationships, trust, and communication with our community and Police Department.”  And so, in this instance, my mind starting thinking about what is the language that officers can use that will provide the dynamic equivalent between the language of policing and the language of everyday citizens.

At our training, I initially suggested saying, “I’m going to hit you with a sponge round,” but then I realized that might sound to someone like I was throwing a kitchen sponge at you, or worse, might conjure up images of Sponge Bob.  (Not the dynamic being sought of an indivdual complying in a tense situation so that no one gets hurt.)   Upon further thought, I wondered if language that focused more on the action/result might be more clear in layperson’s terms.  “Drop your weapon or I am going to hit you with a bruising round.”  Or an “impact round.”  Language that more clearly shows what will happen if the launcher is used. 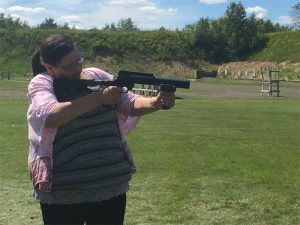 Searching for the right terms (and the right tool) is vital for law enforcement and community to build relationships that address the tensions which exist and raise the level of trust.  My colleague, Renee Van Nett, told the Duluth News Tribune, “The feeling I got right away is that this is going to save lives.”   I felt that too.   More and more, police are interacting with people who are experiencing mental health crises and may not respond predictably. Having this new tool in the use-of-force continuum fills a significant gap that allows for police to get control of difficult situations without having to kill anybody.

Heading home from the training, I couldn’t help thinking about the family of Tamir Rice, the 12-year-old boy who was shot in Cleveland, OH by a police officer.  If those officers had these launchers and effective training, Tamir’s mother might have spent the evening helping to ice a really bad bruise, instead of mourning the loss of her son.

In my opinion, that’s the dynamic that both community and police are looking for.  A way to ensure that our cities and officers are safe in a way that no one ends up dead.

So, as I venture forth into the world of blogging, I wanted to pose this linguistic challenge to others:

A View from the Saddle 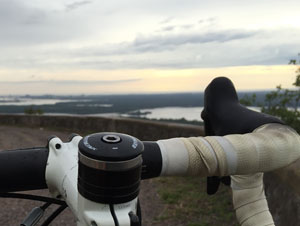